At the end of March, prior to the Hungerford match, BTSS unveiled a new memorial wall to recognise the Billericay Town supporters who are sadly no longer with us.

There was a short ceremony with some moving words from Chair, James Blower, and an impeccably observed minutes silence. 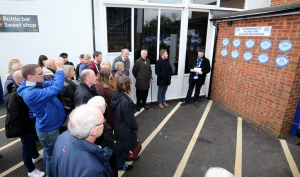 The speech in full:
Thank you for joining us today for the official unveiling of the Billericay Town Supporters Society Memorial Wall.
Football supporters are the lifeblood of any club.  In non-league football, clubs are the fabric of the community and simple don’t survive without both the support and volunteering of loyal fans.  Billericay Town certainly wouldn’t exist today without the significant contribution of many of its supporters past and present.
When we set up Billericay Town Supporters Society, one of the key things we wanted to do was recognise and remember those without who, quite simply, this great club wouldn’t exist.  It was important for us that their legacy wasn’t forgotten and that they had a permanent place at the club that they gave so much too.
Thanks to the fabulous work of Izzy Unite, Paul Jennings and Nick Morgan, it’s a great honour as Chair of BTSS to be able to formally unveil our memorial wall to recognise the contribution and lives of:
Geoff Gardner
Brian Mansfield
Len Dewson
Eric Deards
Dave Bedford
Nigel Harris
Philip Wiltshire
George Hackwell
Roger Thompson
Jim Hall
I will now ask Izzy to lay a bouquet of commemoration and ask you to join me for a minutes silence in honour of these Billericay fans sadly no longer with us